An Opinion Piece by Valley Lizard

In the cosplay culture ‘cosplay is NOT consent’ is a worldwide problem. Here in the Melbourne cosplay community alone there are numerous experiences and examples I could give you, but I won’t. Today I would rather discuss which area of the media law and/or ethics cosplay and consent comes under. It’s tricky because it falls into a grey area where it really depends on the situation, the person/people involved, where it happened etc.

Let’s look at a real life example. Watch the video below and see if you can spot how many times I would have to ask permission to film someone or something. Let me know whether you think what I did comes under media law or ethics or both.

Now for this event I had a media pass, but did I ask every single person for permission who appears in this video?

While you think about that watch this next one about the same event.

Again I had a media pass, so I was an official part of the Animaga media team. Having a media pass gives me more legal media opportunities than the average convention attendee. For example I got early access and I could go in and out whenever I wanted. It also meant that because I was wearing a media pass tag I did not have to ask permission from every single person at the convention if I could film or photograph them. That would be ridiculous especially since there were just, so many people there. Basically if you go to a convention, especially if you’re cosplaying, you probably will feature in some sort of media (whether social or otherwise) even if you’re in the background. If you go on stage it is expected behaviour for people to take photos and video.

It is however more legal and ethical to ask permission from people you feature in your media. I asked every single person I interviewed if they were okay with that and every single person to feature in the cosplay dancing video. Crediting every single person can however be hard especially since when I first filmed this some of the younger cosplayers didn’t have YouTube or other social media. Years later I would still like to find and credit people, but it is difficult. Some of the cosplayers in my videos have changed or updated their social media contacts, therefore any past links may not work. It should be fairly clear in these videos that I have kept to the basic media law and ethical standards.

As a photographer and a cosplayer I work in the grey area of the media. I sometimes get it wrong, but I learn and move on to do better next time. One thing I’ve learnt from cosplay photographer is don’t be afraid to talk to your cosplay models. Below is from a lolita photoshoot I did for the Harajuku fashion walk. While lolita and cosplay are different the photography and respect you need to give your models is the same.

I had the idea of getting the people above to form a ‘H’ for Harajuku, which turned out really well in the end. Below is Rosie Roulette attempting to explain my crazy idea. This demonstrates how much you need to work together with your models.

The easiest thing to do when working with people is to create photos they and other people will love and makes them look good. The photo below demonstrates just how amazing (pun intended) these Mary Jane cosplayers are in a humorous way by making them into a meme. It may not look like it but it took at lot of work to find the right light, angle and pose. This meant respect from both the people in front of and behind the camera (aka me). 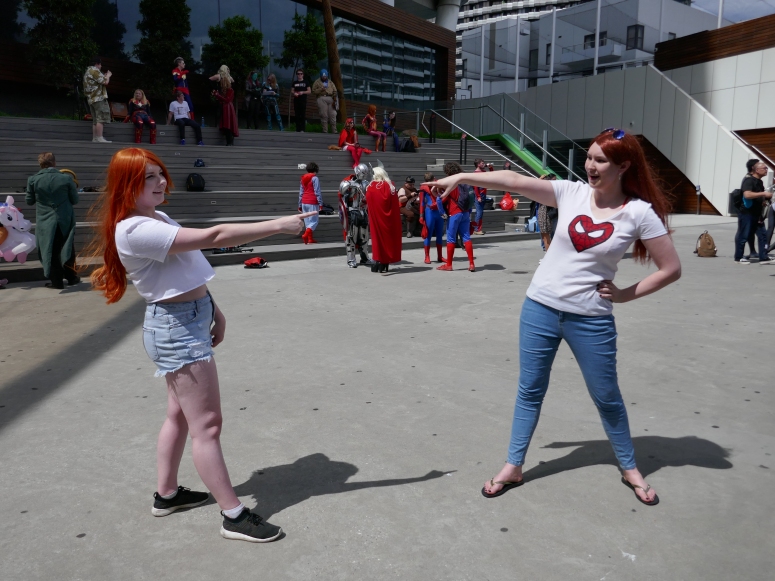 Honestly whenever photos involve animals it always gets tricky. Some animals are born to be stars and other a born to be worthy of the hammer of Thor and Spider love. 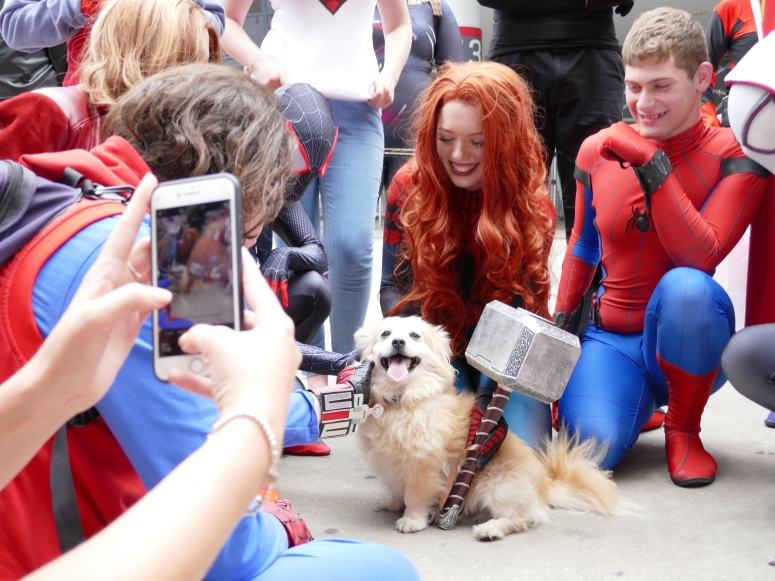 Fortunately it’s fairly easy to ask pet owners permission, what is hard is getting said animal to stay still for a good photo. 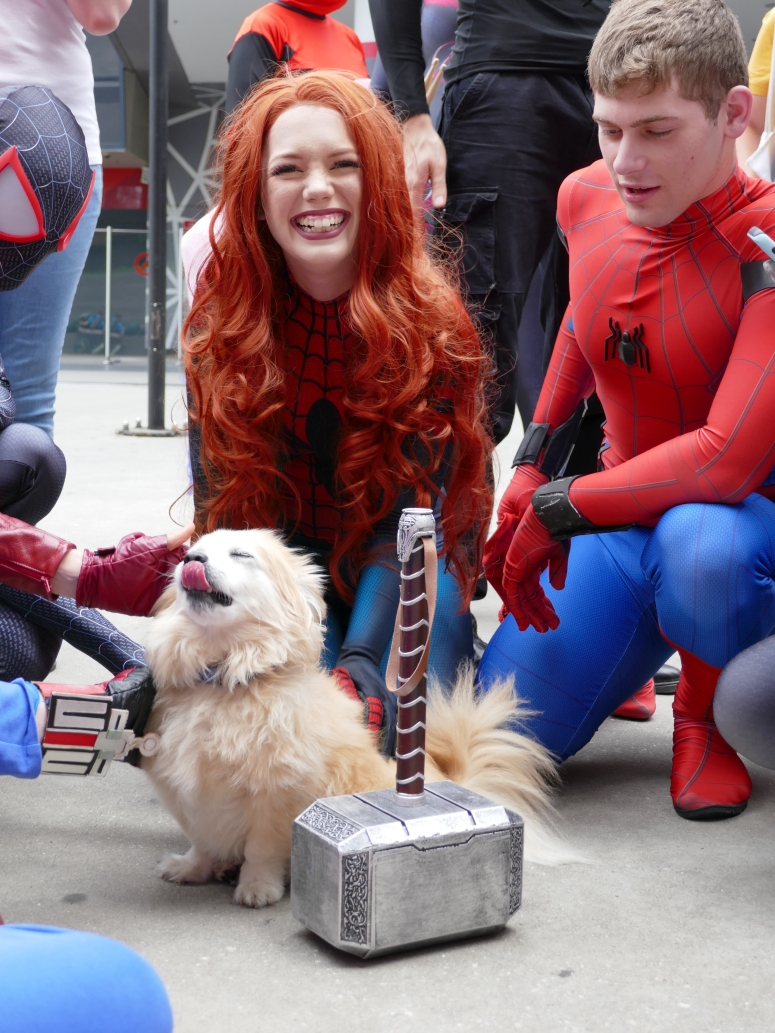 Children are another tricky area especially with cosplay. I don’t have too many good examples of my own photos, but basically depending on the age of the child in question ask their permission and/or their parents and/or gaurdian/s. Of course it is a bit hard to ask baby kangaroos in the wild for permission. In that case you just need to obey local wildlife laws and respect the animal in question.

When it comes to cosplayers like me, who are old enough to make their own decisions, you should say the following things:

Saying these things makes for a much nicer and ethical experience for all those involved and it’s super easy. Unfortunately some people don’t understand that no means no. Often if a cosplayer if already busy or tired or whatever they might say no to a photo. Instead of saying please or taking a photo anyway it is best to just accept ‘no’ and move on. If you want my tips: take photos at the begging of the day because us cosplayers won’t be as tired. Another great idea is to go to a cosplay parade or competition to take photos. This is designed for you take photos of cosplayers, therefore it is the perfect opportunity.

Candid photos are another story, which I might write about later. First what do you think about this topic? Do you have any personal experiences to share? 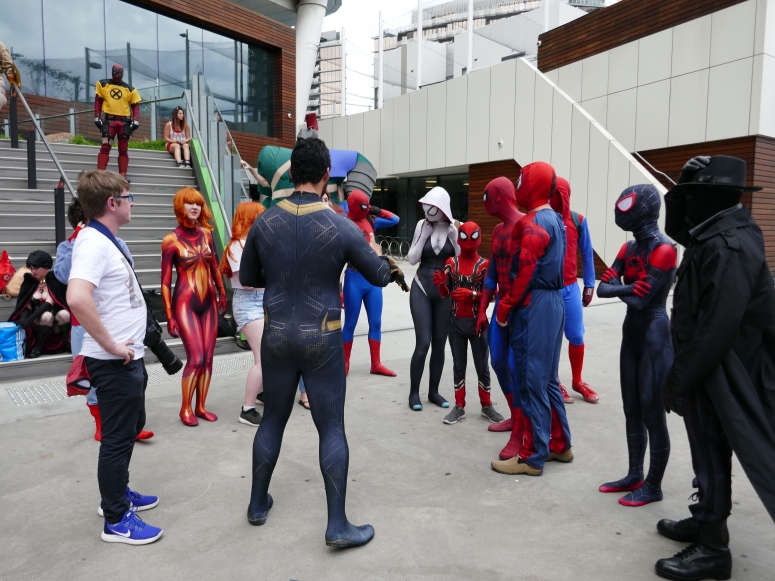 The above photo works well because it isn’t posed and therefore tells a story.

All photos in this post are credited to Valley Lizard. I either took the photos myself or was in them.

Help get Lizard's words out of the Valley

One thought on “Media Law or Media Ethics?: Cosplay, Lolita Fashion and Consent”